»  Some quantities do not add or subtract only in the amount 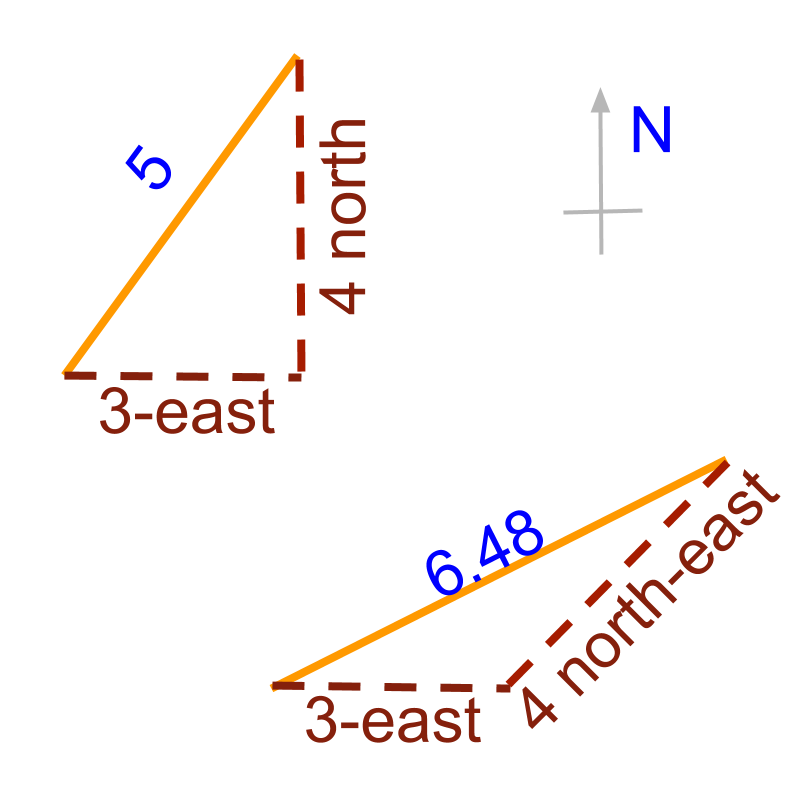 One of the fundamental aspects of science is to measure and specify quantities. Examples:

•  the amount of electric current: 5 ampere

•  the amount of time taken: 3 seconds

•  the amount of distance traveled: 20 meter


Examples for addition of quantities

•  planning a 3 second walk and then reducing the time by 1.2 second result in 1.8 second walk

With this basic of

•  addition and subtraction of them

We have a question.

•  Is amount of a quantity sufficient to completely specify quantities?

To understand the question, Let us look at another problem.

A person walks in a football ground. At first he walked 4 meters and then another 3 meters. How far he is from the starting point?

Any one of them can be correct.

If the person walks 4 meters straight and continues in the same direction for another 3 meters, then 4+3=7, as the distances are added when the directions are same.

If the person walks 4 meters straight. He turns around towards the starting point and walks 3 meters, Then 4−3=1, as the person walked back 3 meter in the opposite direction.

Let us take a person walking from position 'p', 3 meter towards east and another 4 meter towards north. Then the straight distance between the end position and the start position is 'NOT 3+4' and 'NOT 3−4' either.

The problem is illustrated    in figure. A line of 3 meter and another line of 4 meter perpendicular to the first line are shown. We can solve this using Pythagoras Theorem, which helps in finding hypotenuse of a right angle triangle using the two sides.
3 meter and 4 meter are two sides of a right angled triangle and so
distance=√32+42

Measurement of some quantities require not just the amount , also the direction.

To completely specify and mathematically use, some quantities require both magnitude (amount) and direction. Such quantities are named as Vectors

magnitude: The measure of amount of a quantity.

Direction: The measure of relative position or orientation of a quantity.

In the above, 'he walks towards east' specifies direction 'east'.

Identify the statement in which direction information is specified.
She felt the gravity pulling down.
She understood the gravity of the situation.
Gravitational force in Earth is higher than that of Moon

In the above, 'She felt the gravity pulling down' specifies direction 'downwards'.

Identify the statement in which direction information is specified.
Friction makes it possible to walk.
Friction acts against the movement.
friction causes wear.

Identify the statement in which direction is specified.
On hearing the news, he smiled.
He spilled coffee.
He throws the ball towards me.

In the above, 'He throws the ball towards me' specifies direction 'towards' a reference.

Identify the statement in which direction is specified.
Wind blew at 45∘angle.
Wind uprooted a tree weighing 250kg.
Wind caused the fan to rotate fast.

In the above, 'wind blew at 45∘angle' specifies direction 'at 45∘angle'.

In "number systems", we have learned the following.

Whole numbers are 0,1,2,⋯. These are used to count or measure quantities.

Whole numbers representation is not sufficient to represent directed numbers.

For example, consider the numbers in
• I received 3 candies and
& bull; I gave 3 candies.

In the whole numbers, both these are represented as 3.

Integer numbers are represented as follows.

3 is represented as either received:3 or aligned:3.

−3 is represented as either given:3 or opposed:3.

Whole numbers and Integers representation is not sufficient to represent quantities of part of an object.

For example, A pizza is cut into 8 pieces.

3 whole pizzas and 5 pieces of a cut pizza are remaining.

Whole numbers or integers represent them as two quantities: 3 pizzas and 5 pieces when one whole is cut into 8 pieces. This representation is descriptive.

The direction information of vectors refers to the spatial direction,

•  y-axis (eg: forward and backward for a person) and

Note, the right-left, forward-backward, up-down are one particular example. It can also be east-west, north-south, up-down. Or it can be in other forms.

The values of a vector along the given spatial directions can be positive or negative (meaning aligned or opposed in direction).

Hope you understand the difference between

•  direction specified for positive and negative numbers. And

A Vector: A quantity that requires both magnitude and direction information to process mathematically.

The word 'vector' means 'to direct towards a point'. Like in the sentence, 'the aeroplane is vectored towards New York.'

There are other quantities that are measured with only 'magnitude' and do not have 'direction' information.

Examples:
•  Mass of an object
•  temperature of water
•  the amount of time taken

Scalar: Quantity that requires only magnitude information to process mathematically.

The meaning of the word 'scalar' is derived from 'to scale ; to measure'. It is used in mathematics to denote quantities with only magnitude.

A scalar quantity does not have direction as part of the measurement.

When measured, a vector quantity is specified by both magnitude and direction.

A person, facing east, measures the temperature of the glass of water as 25∘C. Is this measure scalar or vector?
The answer "a scalar". The person facing East does not add to the measure, rather an irrelevant information.

A person, measures the distances between three points on the floor as AB =20cm, BC =10cm, and AC =15cm. Are these measurements scalars or vectors?

The points on the floor forms a triangle and direction information can be derived as angle between line segments. So, these are implicitly vectors with only magnitudes of them provided.

A person, measures the distances between three points on the floor as AB =20cm and BC =10cm. Are these distances scalars or vectors?

These are supposed to be vector quantities. The direction information is not measured. Thus the measurement is incomplete.

Scalar: Quantity that requires only magnitude information to process mathematically.

A Vector: A quantity that requires both magnitude and direction information to process mathematically.